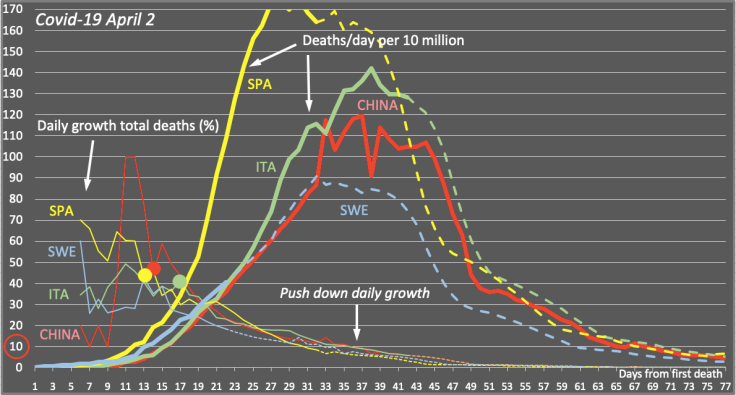 In an earlier post I tried to give a picture of the situation of the Covid-19 pandemic in Italy, Spain and Sweden, on March 26. Here’s an update from April 1st.

Note that I’m not an epidemiologist, but I know mathematics and I’m showing what the data might tell us.

The forecast is based on a simple observation: In ALL countries, the TOTAL number of deaths grows by a certain percentage each day, just like interest on interest on the money in your bank account (exponential growth). And in ALL countries, the daily growth starts high—about 40-50%—and after some initial bumps it decreases day by day (while the total number of deaths obviously continues to increase). From this observation, you can count ahead, using the time series of percentages from China.

Looking at Sweden, the forecast indicates that we are still on a lower curve than Italy even though we haven’t yet chosen to implement a full lockdown. It is noteworthy Sweden’s curve is higher than Norway’s, while Denmark which implemented severe restrictions on March 11 has now the same increase in total deaths as Sweden, and the UK, in lockdown since March 23, has a significantly higher increase in deaths than Sweden, even though it should be a week ahead with a lower increase by now.

The forecast for Sweden, however, is HIGHLY uncertain, as you will soon see from the case of Spain below. Until the number of daily deaths has reached its peak as in Italy, things may still change very much from one day to another.

But if the situation in Sweden continues like this, we might possibly be able to keep the virus spread under a certain control, as I noted in my last post, through an early implementation of a number of recommendations—wash your hands, stay at home if you have symptoms, work from home if you can, avoid meeting people, avoid visiting the elderly. Plus a series of favorable conditions in Sweden when it comes to limiting infections—less spontaneous social life, less daily integration between generations, and a tendency to do what the authorities ask us to do for a common good (which might all be seen as not so desirable from other points of view).

On top of this, Sweden is now tightening the recommendations, emphasizing the importance of keeping distance to people, both indoors and outdoors etc.

For Spain the situation looked far worse than in most countries, but it has improved significantly in the last few days, and the country seems to be reaching the peak of daily deaths right now. Why? Because the percentage I mentioned above has dropped significantly faster in recent days than in Italy and China. Interesting!

Thus, the steeper slowdown of the increase of deaths in Spain must be due to something else.

One possible explanation is herd immunity (due to lots of people being infected without symptoms, maybe 100x more than the confirmed number of cases) which in that case is slowing down the spread of the virus (and consequently the increase of deaths) more efficiently than the lockdown. A rapid early spread of infection, as happened in Spain, would then lead to the slowing effect from flock immunity being achieved earlier and stronger.

The topic of immunity is important since it will decide whether we will be able to safely lift restrictions without new clusters being formed when the first wave of infection has petered out at the end of May, or if we will have to go on with regular restrictions until we have a vaccine, about two years from now.

We will know this for certain only when we start using antibody tests, which are now being developed, with plans for large scale testing starting in some countries in a few weeks from now.

The tests we are using now only indicate whether there is an ongoing infection or not, while antibody tests will let us know whether an individual has had the infection or not.

But even if there would be immunity, we still don’t know how long immunity lasts, and if a second infection could actually hit those who have been infected before even harder, as is the case with certain viruses such as Dengue.

Note: The number of deaths per day in the graph is an average over five days. In Sweden, the numbers of deaths over the last week has been distributed slightly (following exponential growth) since the Swedish health care regions have reported that the registered number of deaths had been delayed for some days and that the delayed numbers were accumulated on April 1st and 2nd.