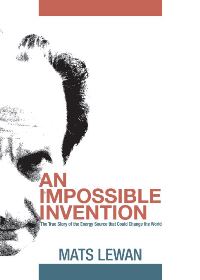 For three difficult years I have experienced much that I wanted to discuss, that I had thought people would want to investigate and understand better. Yet reaching out has been difficult for me. I want you, the reader, to comprehend, forgive and then participate.

The term ‘cold fusion’ is so stigmatized that everything even vaguely connected with it is ignored by media outlets in general and by the science community in particular. Unless it’s attacked. Meanwhile we might be missing an opportunity to change the world.

That’s why I’m relieved today, when I can finally share this story in my new book An Impossible Invention. It’s about, yes, cold fusion.

It’s actually two stories. One story in the book is about cold fusion itself, about the inventor Andrea Rossi and his energy device the ‘E-Cat,’ about the people around him and about how I became involved and subsequently investigated and contributed to a series of on-going events in this scientific arena.

The other story in the book is about how people relate to the unknown, to the mysterious, to the improbable and to what we believe is ‘impossible.’ The story of how new ideas are accepted or rejected, of whether one is curious or uninterested, open-minded or prejudiced.

The book may reveal events surrounding Rossi and the E-Cat. It should inspire some readers and upset others. I hope it will provoke discussions—lots of discussions, among other things about what’s impossible or isn’t. Consider what the British runner Roger Bannister—the first human to run  a sub-four-minute mile, previously believed impossible—perceptively stated: “The human spirit is indomitable.”

Who knows what will happen? More is to come. You, the reader, will play an important role in determining how these matters evolve.

By the way–just as I’m writing these words I’m receiving new information on events that strengthen some pieces of the story in the book, and also some information that add to my doubts regarding certain stakeholders.  I cannot tell you more right now, but I will keep you updated in this blog and in the free newsletter of the book.